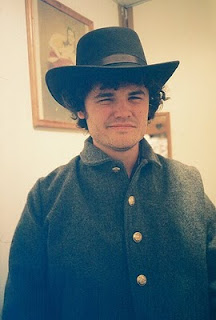 I met this squinting gentleman at Death by Audio this summer, and wrote a 'lil review of the collection of songs he gave to me. C'est ici:

Some albums take a long time to like, and others enter your ears like a guest you never knew you were waiting to receive. Stick to the Shadows, the forthcoming disc of sun-kissed Americana that songwriter Andy Dale Petty gave me at Death by Audio this past summer, is one of the latter. After pressing play, an electric guitar breaks like dawn over grassy hills, and then an acoustic complement picks a careful path across the landscape. You might not forget where you are when you hear it first.