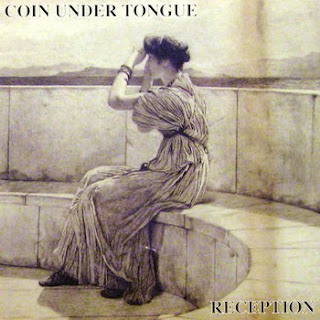 Coin Under Tongue: What an astringent jolt of a band name! Check this here review of their latest joint (rolled with metal shavings and warehouse dust):
“I came out of my shell - Into a cutesy neon hell,” sings Joe Kelly near the beginning of Coin Under Tongue’s new album, Reception, and during seven of the record’s nine songs, he does some serious screaming about it. As Kelly depicts his urban experience with a profusion of lyrics and a searing mixture of refined and unrefined post-punk guitar, bassist George Wilson and a trio of drummers (including regular band member Greg Wilson) help kick up a slamdance with metal polyrhythms that ground the noise.
Album opener “Beyond Yes,” which includes Kelly’s nifty description of the Bedford scene, invades the ears with twisted, trebly guitar cuttings and a vocal as deliciously distorted as Kurt Cobain’s on parts of Nevermind. “Dogma Sheen” clears the air with a volley of clean, Cure-like chords before the assault begins anew, and Kelly’s playing incorporates hints of Wire and P.I.L. during a luminous solo in “Junksmith.” After a mid-album respite comprised of a folk protest and a noir narrative, the volume rises again with the title track, a song that begins as a doom-metal dirge and quickly goes hardcore. With vivid, economic images that would make a writing teacher proud, Kelly screams about a wedding party that seems perfectly enjoyable, but instead features “a couple frozen in its prime.” It’s not the best song on the album, but the contrast between the singer’s perspective and the scene he describes is disturbing and rare.
In fact, it’s during the closing “Strong Things,” a mixed acoustic and electric song, when you start to realize that Kelly is a pretty good lyricist, something which can get lost underneath the sheer quantity of the words. “I know your schedule’s pretty packed / Mine’s just started unraveling,” he sings, over a strand of winsome, acoustic guitar, about an ex-lover from home who’s started to make it in New York. “It’s hard to hold onto strong things,” he later drones, applying a dab of lustrous black to the neon he sees around him. Kelly swipes a Stephen Malkmus chord progression to make the point, but the instrumental squall that follows is all Coin Under Tongue.
at October 05, 2010

Email ThisBlogThis!Share to TwitterShare to FacebookShare to Pinterest
Labels: Coin under Tongue