“Tearing paper makes it sculptural,” says Sasha Ascher, the curator and one of two artists-in-residence at the Oak Street Gallery in Greenpoint. This phenomenon, along with a formative perception of the edge between tree and sky, informs the way Ascher eschews straight-bordered work in favor of the irregularity of tears, and her interest in the excavation of self manifests in a partially eviscerated notebook, its exposed pages painted light taupe, light brown, and robin’s egg blue. In Oak Street’s first show, which opened last Sunday as part of the Northside Art festival, Ascher is displaying an unfurled scroll, darkened with charcoal, that resembles the body of a Chinese dragon, and strips of paper that evoke vistas of a forest, an ocean, and a lake. Another small piece depicts two vase-like shapes, perhaps wrapped in shawls, with disembodied faces floating on top. 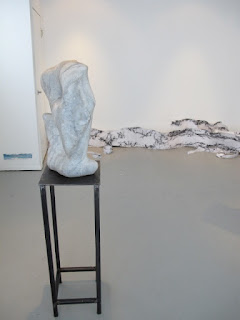 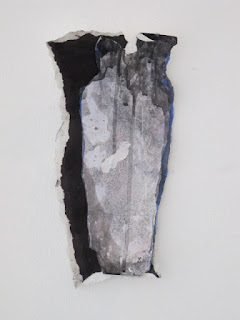 Ascher’s thin materials and jagged edges contrast with Oak Street owner Stephen George Balamut’s three mostly smooth, abstract sculptures of Italian marble, which both allude to and resist identification as fleshy, human shapes. Balamut, who cites Constantin Brancusi as an influence and sculpts without an object in mind, said the contrast in the artists’ media is counterbalanced by their creation of three-dimensional forms. The rock and paper “may have different personalities, but they look good together,” Balamut said. 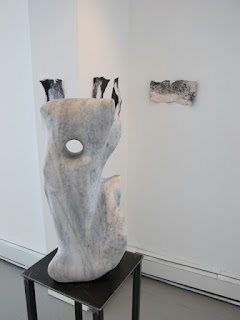 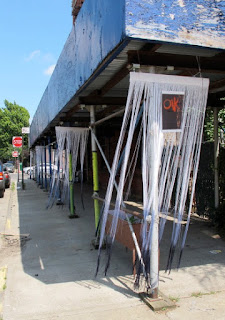 For the opening, Ascher also hung gorgeous strands of pearly fabric, dyed two shades of indigo near the ends, from scaffolding that surrounds a neighboring building; they swayed invitingly in the breeze. Oak Street Gallery, at number 84 west of Franklin, is now open by appointment. Email oakst.g@gmail.com to schedule a visit.
at June 22, 2012