Not so pretty in the Citi

While walking to the E train underneath Court Square last Wednesday morning, I saw three people spreading the word about an Occupy protest at the enormous Citigroup building in Long Island City. One man handed out handbills claiming that the bank made 4 billion dollars and paid no taxes (presumably in 2011), and someone else held up a sign advertising free bagels. I was impressed by the confidence and carriage of the organizers: they spoke up into the teeth of the commute, and they dressed as if they were headed for office jobs. I later found out that one of the three, Jolie Terrazas, is a doctoral student in Industrial Organizational Psychology at CUNY, as well as a part-time researcher in its office of Institutional Research and Assessment. I didn’t see it, but she told me that she brandished another sign asserting that the Occupiers had jobs.

When I got to the protest around 5:30—the action lasted from 8am-8pm, and took place near the birch trees where Thompson Avenue meets Jackson—I saw about 20 attendees. A saxophonist played “I Wish I Were a Rich Man,” two people wore cardboard houses that may have been in states of foreclosure, and others spoke with journalists and each other. Ken Gale, a solar power advocate and co-host of Eco-Logic, an environmental show on WBAI that airs every other Tuesday at 8pm, noticed my notebook and soon started telling me about the fight to implement commercial net-metering in New York. Approved by then-Governor David Patterson in 2008, commercial net-metering allows businesses that install solar panels on their buildings to profit from the excess energy those panels generate, energy that goes back into the grid for everyone’s use. According to Gale, “old school” employees at ConEd and other utility companies opposed the policy, and there remains an anti-solar bias at ConEd. But he also reports that young employees are changing the culture of the company. 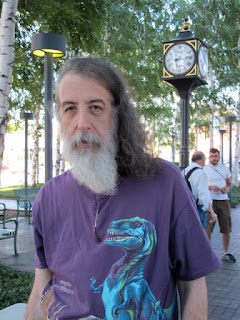 Reflecting on our conversation, I remembered that Occupy is like a human library. Within the context of protesting—or even just questioning—the latitude and largesse afforded the financial industry and the ways it exploits the less powerful, anyone can learn about a host of important issues.

Terrazas said that the 10 or so people who came out of the Citigroup building to speak with protesters were "generally receptive," and that interactions with police, of whom I counted nine, were "friendly." She also told me that Alexis Goldstein, a former employee of Morgan Stanley who gave a speech earlier in the evening, noted that she heard her colleagues in finance encourage one another to “rip your client’s face off,” i.e., tell them that a particular investment is great when it is actually “crap.” For her part, Terrazas thinks it’s wrong that banks receive zero interest loans and then lend money to consumers at high rates. 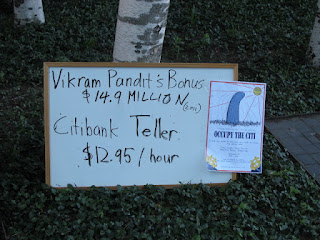 Occupy Astoria LIC has been meeting weekly since December and focuses on outreach and education. According to member Nick Levis, the organization has about 100 members and includes several working groups. “Look, we’re not monsters, we’re employed,” Levis said. “This is what people want to hear. I wish we didn’t have jobs, [because] we could do this each day.” Levis went on to compare the Savings and Loan scandal of the 1980s, which he claims resulted in prison time for 1,000 executives, with the financial collapse that began in 2008. Instead of “sweetheart settlements,” he proposes “law enforcement.” Doesn’t sound so monstrous to me. 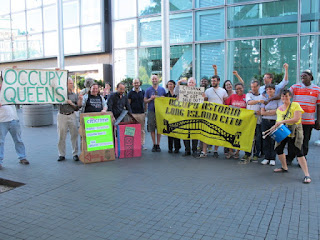 Throughout July, Occupy Astoria LIC is hosting a free Tuesday night documentary series at the Church of the Redeemer on Crescent St, with Food, Inc. scheduled on the 10th,  Wikirebels—The Story of WikiLeaks on the 17th, and The American Ruling Class on the 24th. Visit www.OccupyAstoriaLIC.org for more information.
at July 02, 2012